ZELE, Belgium, July 14, 2020 /PRNewswire/ -- More and more companies are finding a solution for the climate challenge in passive cooling. ABN AMRO's ambition is to make all its office buildings 'Paris Proof' by 2030. To this end, the bank has enlisted the help of engineering firm Koppes and solar window film producer Umisol. This unique window application will enable ABN Amro to achieve its climate targets by reducing their ecological footprint while drastically cutting their energy bills. 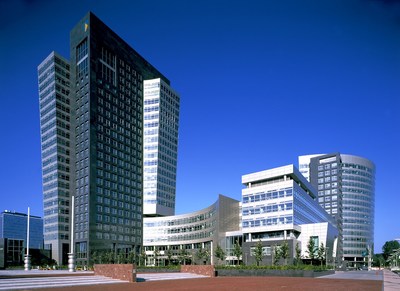 CEO Robert Koppes says: "We are the architects behind the newly launched GREENE concept, ABN Amro's sustainable and circular housing concept. The pilot phase has been completed and we are ready for rollout of the concept."

In 2016, ABN AMRO succeeded in making its Alkmaar branch zero-energy and CO2 neutral, gaining  the bank a BREEAM-NL-In Use Excellent label with the help of Umisol. "We installed our innovative window films which offer a blend of optimal heat protection and extremely high light transmission. This resulted in heat load reduction and improved comfort, without changing the external appearance of the building," said Francis Denoo of Umisol.

The Alkmaar concept has now been adopted throughout the entire ABN Amro office network."The film offers nothing but advantages.It is being used in new construction and renovation projects and is perfectly suitable for application on the inside of any type of glass window, avoiding any sort of inconvenience to the staff. The heat-resistant foil had also been applied to offices in Amersfoort and Amstelveen in the meantime, reducing the thermal load on the large glazed façades."

Through the years, Umisol has become the point of reference for passive cooling in existing and new buildings. The company is a member of Group M.A.M. manufacturers in Europe.