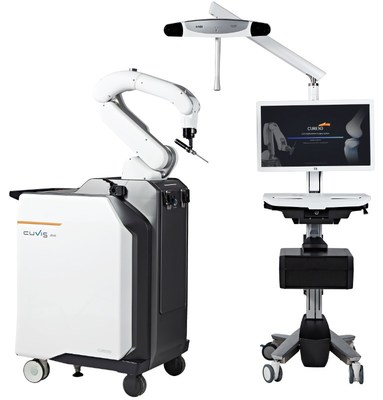 CUVIS-joint was MFDS certified in June of last year and was provided to domestic general hospitals, orthopedic hospitals, and even Meril Life Sciences Pvt. Ltd., India.

In early March, Sakra World Hospital carried out 100 successful Total Knee replacement surgeries with the Meril-CUVIS joint Robotics system and is carrying out 10 operations on a weekly basis. Additionally, followed by Sakra World Hospital, SAI hospital (second in India) is in preparation for operations as CUVIS-joint will be supplied.

CUREXO, with the CE marking, will be able to expand its market across Europe, Australia, and parts of Asia as it has done in the previous year in the domestic and Indian markets. They have their eyes set on obtaining FDA approval in order to further expand its global market.

CEO, Jaejun Lee, said, "We are happy to see that we were approved for the CE marking earlier than we expected. We anticipated approval to take place in the second quarter of the year." He continued, "We plan on promoting partnerships with implant and medical enterprises in Europe and proceed to signing agreements. Also, we expect a positive outcome for our expansion into the global market in 2021 with our early approval."

After CUREXO was acquired by Korea Yakult Co., Ltd. in 2011, it began to establish a stable business environment and promoted the development of full-fledged medical robots. By taking over the medical robot business division of Hyundai Heavy Industries in 2017, CUREXO has secured a diverse portfolio of medical robot products such as 'CUVIS-joint', 'CUVIS-spine' and 'Morning Walk', as well as unrivaled medical robot technology. Through its own research and development, it has obtained licenses for each robot product and is stably selling it to domestic and overseas medical markets.

In particular, it has established itself as a domestic medical robot company by supplying about 18 medical robots to the domestic and overseas medical markets during the second half of 2020, when it started to sell its own medical robots in earnest.