BEIJING, Nov. 26, 2020 /PRNewswire/ -- The 1st China (Beijing) International Audiovisual Conference (CIAC) was held in Beijing from November 19-22 by the Beijing Municipal Bureau of Radio, Film and Television, under the guidance of the National Radio and Television Administration and the Beijing Municipal People's Government, with The Global Cloud Audiovisual Forum and Launch Ceremony being a key part. 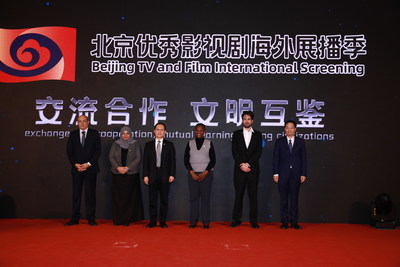 Centering on the conference's theme of "Audiovisual Changes Life, Culture Leads the Future," the forum focused on TellingChina's Story Well to innovatively promote international communication and strengthen multi-level dialogues and cultural exchanges with other countries.

Events such as Beijing TV and Film International Screening, The Beijing New Audiovisual Overseas Collaboration Alliance Launch Ceremony, The MOU Signing Ceremonies on International Film and TV Cooperation, and other audiovisual exhibitions were hosted at the forum, showcasing the latest achievement of high-quality films and TV dramas from leading Beijing-based production companies, and exploring the future development and cooperation opportunities in the audiovisual industry.

Ambassadors, counsellors and officials of embassies from Europe, Africa, the Middle East and other countries and regions to China, as well as representatives of various media outlets, audiovisual organisations and enterprises attended the forum.

Yang Shuo, Secretary and Director General of the Beijing Municipal Bureau of Radio, Film and Television delivered a speech.

He said that Beijing, as the political and cultural centre of China, and the centre of creative planning, production, promotion, distribution and communication of Chinese film and television, has the responsibility and obligation to build a pragmatic and effective platform for international audiovisual exchange based on international cooperation.

China Film and TV Conference is an annual high-level project for China's cultural export, initiated by Beijing Municipal Bureau of Radio, Film and Television in 2014. Over 300 Chinese TV dramas and films, including Beijing Youth, From Chung Kuo to China, Let's Get Married, and The Longest Day In Chang'an have been introduced to more than 30 countries and regions including the UK, Russia, Greece, Colombia, Brazil and Argentina since then. Held in conjunction with the conference were other events such as business seminars and visits to prestigious audiovisual organisations.

Integrated in the China International Audiovisual Conference this year, the China Film and TV Conference was held in the form of Beijing TV and Film International Screening. It was also online in Europe, Africa and the Middle East outside China.