CHANGZHOU, China, Sept. 29, 2020 /PRNewswire/ -- On September 26, China's Changzhou National Hi-Tech District (CND) held the ground-breaking ceremony for this year's third batch of key projects and the commencement ceremony for the Xinchuang project. Construction of 19 new production facilities with a combined investment of 15.83 billion yuan, including 8 municipal-level projects and 11 regional-level projects, started on the same day. With a focus on photovoltaics (PV) and smart energy, carbon fibers and composites, renewable fuels-powered vehicles and automotive parts, new medicines and medical equipment, next-generation IT as well as modern services, alongside the application of new scientific and technological achievements and new technologies as defined under the Chinese government's "Three New" economy initiative, the projects are expected to provide new impetus to the future development of the district. Construction work on 184 of this year's 191 projects, 96.3 percent of the total, has begun. 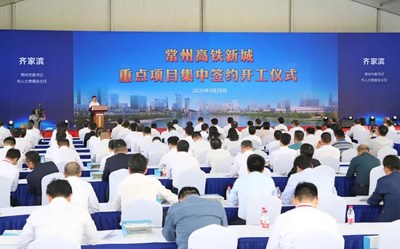 Invested by Xinchuang Carbon Valley Holdings, the 5 billion yuan Xinchuang project, where the ceremony was held, has a planned annual capacity of 36,000 tons of large-tow carbon fiber and high-performance structural parts for carbon fiber composites, extending both ends of the low-cost carbon fiber composite industrial chain and creating a complete industrial chain covering composite design, testing, warp knitting, composite molding and downstream applications. Upon completion, the project is on target to generate 10 billion yuan in annual output value. Construction commenced on Septembers 26, just three months and 17 days following signature of the contract on June 9, setting a new record in the district for the speed at which a project moved from signing to groundbreaking.

Changzhou Municipal Standing Committee member, CND Party Working Committee secretary and Xinbei District Committee secretary Zhou Bin said, CND will make sure that the best resources are mobilized for the construction of not only the Xinchuang project but also for every project in the district, while enhancing efforts to attract as well as assist in the construction and servicing of new facilities, making greater contributions to the urbanization of as well as the growth of new towns and cities in the surrounding area.