- The Follow me to be Healthy with Europe campaign has reached its first-year mark, having made more than 32 million impressions on social media;

- Funded by Freshfel Europe, Aprifel, and the European Commission, the campaign aims to increase fruit and vegetable consumption in Europeans aged 18 to 30;

- Collaborations with influencers and monthly challenges have encouraged young Europeans to share tips to easily integrate fruit and vegetables into their daily diets.

BRUSSELS, July 2, 2020 /PRNewswire/ -- Today, the "Follow me to be Healthy with Europe" campaign turns one year old. Launched by Freshfel Europe, Aprifel, and the European Commission, its aim is to encourage young Europeans to increase their consumption of fruit and vegetables to a minimum of 400g a day, to improve and ultimately transform millennials' dietary habits. 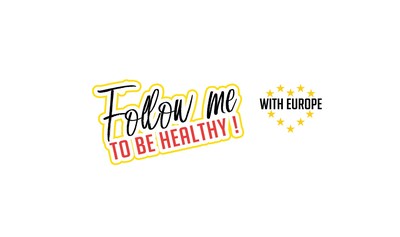 A digital-first initiative, the Europe-wide campaign has generated over 32 million impressions on social media in its first twelve months. Through collaborations with social media influencers, such as Gaëlle Prudencio, Luisa Ambrosini, and Carlos Rios, the campaign has shown that eating a diet high in fruit and vegetables is not only healthy but also easy to achieve and fun to experiment with.

Using the hashtag #400gChallenge, followers are 'challenged' to include more fruit and vegetables in their daily diet. These challenges are promoted by monthly infographics, tips, and videos, which showcase the health benefits of fruit and vegetables in an engaging and relatable format across the campaign's six social media channels. "It was a natural choice to make this a digital-first campaign - on average, our target audience spends more than a third of their awake hours online," said Philippe Binard, Freshfel Europe's General Delegate.

The online side of the campaign, which runs until the end of 2021, is complemented by its presence at events. At the launch event at the Eurockéennes festival in Belfort in July 2019, 1 ton of fresh fruit and vegetables were distributed to festivalgoers. Visitors to the campaign's stand were also able to speak to a dietician about the importance of fruit and vegetable consumption. "From speaking to visitors at our stand, it was clear that many young people weren't aware of the wide range of health benefits of a diet high in fruit and vegetables," said Mathilde Fléchard, Aprifel's European project manager.

This low fruit and vegetable consumption is particularly noticeable among 18-30-year-olds. For this reason, this pan-European awareness campaign focuses on this specific target group.