LANCASTER, California, Nov. 11, 2020 /PRNewswire/ -- Lancaster, California, the nation's first city to embrace hydrogen power, reached out to Japan to enlist partner municipalities in the development and use of hydrogen as a new generation clean fuel. 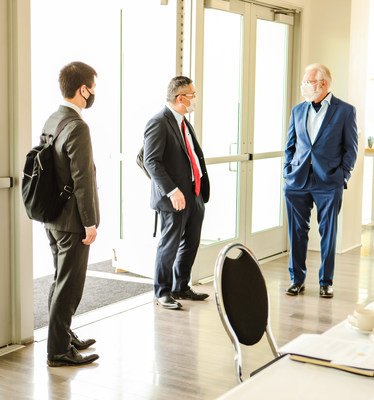 R. Rex Parris, Mayor of Lancaster, hosted Japanese government officials on November 6 to discuss pairing Lancaster, a city just north of Los Angeles, with a "smart" city in Japan which is equally devoted to integrating hydrogen into its power grid, fuel distribution, storage, and use.

Mayor Parris has committed to a hydrogen transition at previous City Council meetings and has challenged other cities around the world to choose hydrogen as well. Lancaster has a proven record of being the first in renewable energy solutions, demonstrating an ability to execute on energy initiatives. He is confident that Japan may be the first stop on a pathway for cities around the world to shift into using hydrogen.

Mayor Parris developed a vision for hydrogen as a new way to further decarbonize the city – a mission he embarked on over a decade ago. He attracted companies that have already built innovative hydrogen projects and are being developed with major companies like Hitachi Zosen Inova. The Mayor then developed a comprehensive plan for the City to achieve their hydrogen goals, announcing it publicly at City Council meetings to involve local residents and educate the public on the benefits of hydrogen to Lancaster. Recently, more companies and other cities have seen Lancaster's success and want to join the movement by following the city's plan.

Hydrogen has wide-reaching benefits including improving the air quality, providing a secure and reliable energy source, reducing greenhouse gas emissions, and creating highly skilled jobs. Hydrogen is abundant in our environment. Hydrogen can be produced from diverse domestic resources with the potential of near-zero greenhouse gas emissions. Hydrogen as an alternative fuel stems from its ability to power fuel cells with domestic production, fast fueling times, and high efficiency. About half of the US population lives in areas where air pollution levels are high enough to negatively impact public health and the environment.

"Hydrogen is the future, it is the decarbonization strategy of the future, and we will lead the effort with other cities following in Lancaster's footsteps," Mayor Parris told the delegation from Japan, which included Mr. Imai, Consul of the Consulate General of Japan and Mr. Saeki, Executive Director of the Japan External Trade Organization. "Lancaster is America's first hydrogen city." Lancaster is beginning sister-city type relationships with other cities seeking to emulate Lancaster's strategy, sharing a roadmap. Mayor Parris envisions other Tier-2 cities as excellent candidates. "The transition to hydrogen does not have to be limited to the world's most famous large cities. In fact, cities our size can do some things they can't. Current plans include building out hydrogen fueling stations for light-duty and heavy-duty vehicles. We support the state's goals for GHG reductions and hydrogen is a great way to get there faster." It should be noted, in a recent grant from the State of CA, most of the $100 million grant was dedicated to large, urban population centers. Lancaster is not deterred.

After the development of a huge solar generation capacity, Lancaster City Council realized that the City had the power to dramatically impact the energy status quo. Many changes couldn't happen at the state or federal level. Lancaster formed its own utility company, Lancaster Choice Energy, and offered residents locally-generated green energy at lower prices and generating revenue for the City. Lancaster continued on to become the first city to go net-zero, generating more clean energy than consumed. Lancaster was also the first city to require all new homes to have solar and with community partners were able to build the first large scale all-electric bus fleet.

"Along the way, we realized that electrons are not necessarily the best medium for storing energy," the mayor explained of the shift in strategy. "Hydrogen can be stored easily and for long periods of time, even in the existing gas grid. It's the perfect resource for balancing the grid with our large amount of intermittent renewable resources, which only work when the sun shines and the wind blows."

Other projects in Lancaster include a gasification plant and Hitachi Zosen Inova's $100 million anaerobic digestion plant which generates renewable natural gas (RNG) from organic waste for conversion to clean hydrogen.

"HZI sees hydrogen becoming an important part of the energy infrastructure first in California, then throughout the U.S.," said Lex Heslin, Senior Project Developer for energy company Hitachi Zosen Inova. "At the state level, California is embracing hydrogen and gaining nation-wide attention. Today, an article in the New York Times cited California's recent momentum in hydrogen energy transition and its potentials. Lancaster is determined to do more than expected on the local level."

Hydrogen has been gaining traction around the world as governments commit to clean energy. Lancaster is committed to hydrogen, attracting investors, building state-of-the-art facilities, and supporting new companies with advanced permitting, city procurement, infrastructure support, fleet building, and consumer education. "Hydrogen is the future and we invite other cities to join us on the path to decarbonization as a way to tackle Climate Change." Vision and high-level commitment by Mayor Parris along with the development of a comprehensive plan to achieve a transition to hydrogen has led to approval and buy-in from City Council and the public leading to success in attracting hydrogen investment. The focus now is on broadening outreach to include education, research and development, and targeted international cooperation with like-minded cities.

For other cities interested in pursuing hydrogen as a path to deep decarbonization, Mayor Parris suggests the following path:

"We invite all cities, small and large, to accept our challenge to become a hydrogen-powered city and to join us on the path to a clean energy future," Mayor Parris said. "We will be pleased to assist you." 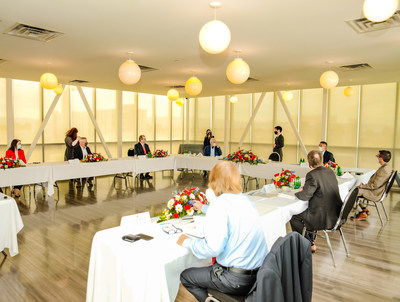