NEW YORK, May 1, 2019 /PRNewswire/ -- Monday in New York City, The Charles Bronfman Prize celebrated its latest Recipient, Amy Bach, founder and executive director of Measures for Justice, a nonprofit whose purpose is to assess the performance of the criminal justice system. "Tonight we celebrate a true pioneer for justice," declared Ellen Bronfman Hauptman.

"Amy Bach works in a world where the arc of the universe is long but doesn't always bend toward justice," noted the Honorable Justice Rosalie Silberman Abella of the Supreme Court of Canada, speaking on behalf of the Prize's judges. "It is a world Amy is trying to fix, one county at a time."

The Charles Bronfman Prize is an annual award of $100,000 presented to a humanitarian under the age of fifty whose innovative work, informed by Jewish values, has significantly improved the world. The Prize was founded by Ellen Bronfman Hauptman and Stephen Bronfman, together with their spouses Andrew Hauptman and Claudine Blondin Bronfman.

"We started this prize more than 15 years ago as a gift to our dad on his birthday," Stephen Bronfman said. "There was no better way to honor the work he has done to create a more just world and to encourage the next generation to do the same."

Ambassador Samantha Power, former U.S. Ambassador to the United Nations, who was part of Bach's nominating team, lauded her friend Amy for focusing on that which is "deemed too small to see and too chronic to fix." and making the invisible in the criminal justice system visible.

After receiving The Prize from Charles Bronfman, Bach, who founded Measures for Justice in 2011 to create tools for change envisioned in her award-winning book Ordinary Injustice: How America Holds Court, predicted, "People will be able to look up a county, say 'There's a pattern, and if you don't fix it, we'll elect someone who will.'"

Sarah Koenig, host and co-creator of the Peabody-award winning podcast Serial, engaged Bach in a conversation, telling her, "You invented a whole new [measurement] system!"

"[Amy] refuses to get desensitized to injustice," Power concluded, referencing the trend toward "falsehoods masquerading as facts." She added, "We must not get used to this." 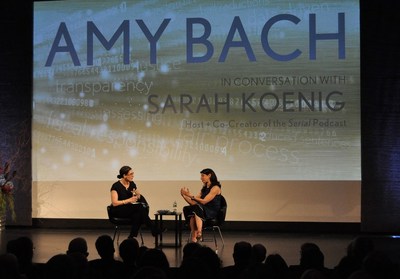