LONDON, Sept. 29, 2020 /PRNewswire/ -- In celebration of over 40 years of partnership as the Official Champagne of 007 and the upcoming film No Time To Die, Champagne Bollinger has produced a limited edition gift box that brings together three icons: Bollinger's signature Special Cuvée, the Aston Martin DB5 and the legendary British secret agent, James Bond. 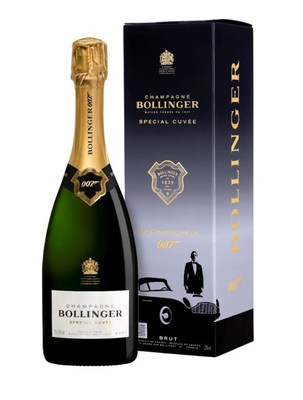 Honouring the most perfect of partnerships, the limited edition gift box features the silhouette of James Bond alongside his Aston Martin DB5. The colourway of the gift box echoes the silver birch finish of the DB5. The Bollinger lettering and logos are depicted in gold and the iconic Special Cuvée bottle has been adapted to feature a black and gold neck collar with a 007 blazon.

Champagne Bollinger worked with celebrated photographer Greg Williams, for the soon to be released Special Cuvée 007 Limited Edition campaign, featuring his signature cinematic style that also appears in the No Time To Die campaign.

Bond, Bollinger and Aston Martin all return in No Time To Die.

The Bollinger Special Cuvée 007 Limited Edition will be available globally from 1stOctober 2020.

The RRP for the Bollinger Special Cuvée 007 Limited Edition is £55.00 and is available from fine wine merchants worldwide.

Images of the limited edition are available HERE

ABOUT NO TIME TO DIE

No Time To Die is the official title of the 25th James Bond adventure. The film — from Albert R. Broccoli's EON Productions, Metro Goldwyn Mayer Studios (MGM), and Universal Pictures International — is directed by Cary Joji Fukunaga and stars Daniel Craig, who returns for his fifth film as Ian Fleming'sJames Bond 007.

In No Time To Die, Bond has left active service and is enjoying a tranquil life in Jamaica. His peace is short-lived when his old friend Felix Leiter from the CIA turns up asking for help. The mission to rescue a kidnapped scientist turns out to be far more treacherous than expected, leading Bond onto the trail of a mysterious villain armed with dangerous new technology.

Champagne Bollinger: Eminent, distinctive, and distinguished fine wines of Champagne since 1829. Guaranteed through the integrity of a resolutely independent family house in Aÿ and through the artisanal know-how of people dedicated to growing and blending excellence. Devotion extending beyond the wines to support a sustainable environment and integration with local communities.