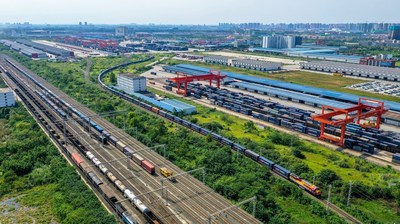 To cope with the impact of the COVID-19 pandemic, the district has resorted to a new development pattern featuring domestic and international dual circulations that complement each other. This allows the local industrial and supply chains to remain stable and results in increased freight train trips and overseas orders.

Statistics from Chengdu customs show the number of China-Europe freight trains on the Chengdu route dispatched in the first nine months surged to 1,600, up 57 percent year-on-year.

Huang Fei, head of the production and logistics department at Geely Auto Chengdu Manufacturing, said the company used to deliver goods by sea, which had a low cost, but the transport period was so long that some parts even began to rust. While the China-Europe (Chengdu) freight train service takes much less time, and with some preferential policies in freightage, the company can greatly reduce production costs, Huang added.

From January to September, Geely exported 1,740 sets of auto parts worth over 110 million yuan by using the freight train services, which helped save up to 4 million yuan in transport costs.

Since the Chengdu route of China-Europe freight trains was launched in 2013, the city has been able to expand its international logistics network in an all-around way. Chengdu now boasts seven international rail lines and six searail freight routes that connect it with 55 cities overseas and 18 Chinese cities.

"Most of our clients use the China-Europe freight train services to transport medium and high-end products and have high requirements on transport time and safety. Thus our goal is to become quicker and safer," said Chen Zejun, spokesman of the Chengdu International Railway Service, operator and manager of the China-Europe (Chengdu) freight trains.

To date, the China-Europe freight trains on the Chengdu route have transported goods worth nearly 200 billion yuan, involving industries such as automobiles, smart household appliances and biomedicine.

The company has set up overseas offices in Nuremberg and Hamburg, Germany, Tilburg, Netherlands, Prague, Czech Republic, and Warsaw, Poland. Employees at these offices work at the same time as those in China despite the time difference to ensure efficient operation of the freight trains.