NEW YORK, Sept. 10, 2020 /PRNewswire/ -- The Empire State Building (ESB) Observatory announces that its ninth annual photo contest will launch today, September 10, 2020. Amateur photographers from across the United States are asked to share their best shot of the iconic building for their chance at bragging rights and the Grand Prize. For the first time, the contest will be interactive for Empire State Building's followers and fans, as they vote for their favorite submissions via esbphotocontest.com. The Grand Prize winner will receive $5,000 and two FlyNYON flight tickets to capture additional aerial shots of the World's Most Famous Building. The second-place winner receives $1,500, and ESB will grant $500 to eight additional finalists. 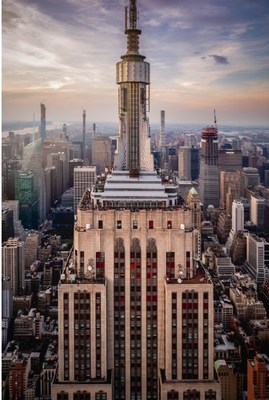 "The Empire State Building proudly stands as the heartbeat of New York," said Jean-Yves Ghazi, President of the Observatory. "As a favorite subject of photographers from around the world, we are impressed by the submissions we receive every year. Our fans' talent is unparalleled, and we cannot wait to see the many ways they have celebrated the world-famous Empire State Building in the ninth year of the contest."

The beauty of the classic Art Deco building rises above the hustle and bustle of New York City as it returns to business as usual. With the completion of its $165 million renovations in December 2019, the wonder of the indoor Observatory Experience now matches the outside, with recallable moments such as the 25-foot Building Model sitting atop the Grand Staircase, the 10,000 square foot second-floor museum, the world-famous 86th Floor Observatory, and the crown jewel, the 102nd Floor Observatory with its floor-to-ceiling windows and an unrivaled view.

The contest closes on November 5, 2020. Entrants must be over the age of 18 and legal residents of the United States. A photo of last year's winner is available at this link. For official contest rules and additional information about the photo contest, visit www.esbphotocontest.com.