- Investors share in net revenues of a global movie

ZURICH, Sept. 29, 2020 /PRNewswire/ -- The team behind one of the world's first fully fan-financed films -MAD HEIDI- today unveiled MAD INVEST, a new film-funding and distribution model set to revolutionise the movie industry. Putting fans first, these MAD INVESTORS have already had the chance to sign up in advance to secure their Mad Heidi shares, which has so far raised CHF 250,000. From today, all investors now have the opportunity to buy MAD HEIDI shares via the MAD INVEST platform invest.madheidi.com. 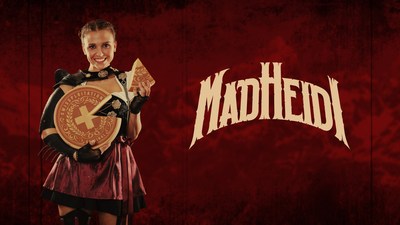 Tero Kaukomaa, co-producer of Mad Heidi, said, "MAD HEIDI is demonstrating that fan-driven films for a worldwide audience are not only fun, they are a profitable investment opportunity. The MAD INVEST model is a first in that backers can directly participate as equals in the financing of a global movie, share in net revenues of a global film, and unlock priceless bonus rewards like being in the film, visiting the set, or even getting their name in the film credits. By using a crowd investment model, blockchain technology, and a simultaneous global release, MAD HEIDI will also reduce the problem of piracy as well as the many middlemen like distributors and sales agents who take their cut and reduce revenue. It's a win-win for the movie's backers and fans in general."

A model for future film production- how it worksA minimum of CHF 1 million is required to begin production of the movie. Only 4000 shares are being made available starting from just CHF 500. In the unlikely event the CHF 1 million production threshold is not reached investors will get their money back.

The distribution of the film is fully controlled by the production team. This allows them to end the problem of piracy as all fans will be able to see the movie at the same time. It also reduces the costs associated with paying distributors and agents. Both will help increase revenues. Mad Investors participate in all net revenue from the film, including digital streams, downloads, sales of DVDs, Bluray or other physical formats, and revenues from theatrical releases and TV-sales. Mad Investors who invest more than CHF5,000 also participate in all net revenues generated through merchandise sales.

Blockchain goes to the moviesCrowd-financing a film like Mad Heidi can involve many stakeholders spread worldwide. Blockchain greatly reduces administrative costs by automating transactions while ensuring trust between all parties. MAD INVEST uses ERC20 tokens based on the Ethereum network, which are minted each time an investment is confirmed. Smart contracts reduce costs and human error, so more money goes to investors. UK-based Filmchain is supporting us with our blockchain-based revenue distribution. All revenues from the film go directly into the blockchain-secured collection account on Filmchain.co, and then into the wallets of MAD INVESTORS. Each investor can then transfer their share of the revenue to their own bank account once their wallet balance has reached a minimum of CHF 30. While cryptocurrency is not a requirement, it can be used to invest.

So, what's the movie all about? The little girl from the alps is back…with a vengeance. Mad Heidi is an action-adventure-comedy-horror parody of the much-loved children's storybook character Heidi. Now all grown up, Heidi is just a girl from the Alps in an alternative Switzerland that has fallen under fascist rule. Little does she know that her yearning for personal freedom will be the spark that ignites a revolution. From fondue torture to death by chocolate, Mad Heidi is a true Swissploitation film. Think Kill Bill meets The Sound of Music.

The team behind Mad Heidi: Mad Heidi is being produced by IRON SKY producer Tero Kaukomaa and Amateur Teen's and Paradise War's Valentin Greutert, and it will be directed by the highly talented, up-and-coming Swiss director Johannes Hartmann.

In 1997, film producer and entrepreneur Tero Kaukomaa established Blind Spot Pictures. Since then he has produced, or co-produced, over 20 feature films including "Dancer in the Dark'' by Lars von Trier, Golden Globe nominee "Everlasting Moments'' by Jan Troell and "Iron Sky''. In 2012, he released Timo Vuorensola's "Iron Sky'', an € 8 million Finnish – German – Australian co-production. The film was heavily crowd-sourced and crowd-funded by a world-wide community of fans. In 2014, Tero founded Iron Sky Universe together with Timo Vuorensola to continue the Iron Sky Saga. In 2019, the €19 million sequel to Iron Sky, "Iron Sky- The Coming Race" was launched. A USD 30 million Chinese film, "The Ark – an Iron Sky'', is currently in post-production. Also in 2019, Tero founded SwissploitationFilms GmbH with Valentin Greutert and Johannes Hartmann to produce and distribute Mad Heidi, the world's first Swissploitation film. In 2020, he founded Son of a Pitch Oy (Ltd) together with Timo Vuorensolato to offer their expertise in crowd engagement and pitching to other filmmakers. Tero believes in quality and the power of marketing, and he wants to use creative new ways to bring fresh content to the market. He is a member of ACE and the European Film Academy. He divides his time between Helsinki, Finland and Zürich, Switzerland.

Valentin Greutert started working in the film business in 2000 after graduating with a Masters in Economics and Business Administration. In 2004, he founded his first production company, HesseGreutert Film, in Zurich, Switzerland. Since 2015, he has headed his new outlet, A Film Company. Greutert has produced many feature films and documentaries, among them pearls like "Rocksteady: The Roots of Reggae" and "Amateur Teens". In 2019, his biggest production to date was released. "Paradise War", based on a true story and represented by TrustNordisk, was shot on three continents with 76 days spent shooting, most of them deep in the jungles of Borneo. The film was a major success in Switzerland. Since 2008, Greutert has been a member of the international producer club ACE. He is also part of the European and Swiss Film Academies, as well as a member of the documentary and fiction commission of the Federal Office of Culture in Berne. Building on his background in economics, Greutert also designed and now distributes KOSMA, a professional software to control film production finances (www.kosma.io).

Active as director and producer since 2007, Johannes Hartmann founded Decoy Films GmbH in 2009 together with two partners. Since then, he has been responsible for the realisation of many commercials, music videos and service productions. His debut short film "Halbschlaf" was selected by Switzerland's leading genre film festival, the Neuchâtel International Fantastic Film Festival, and numerous other international film festivals, and has won several awards. This was followed by other short films and documentaries, which were selected at film festivals worldwide. With his concept for Mad Heidi, the world's first Swissploitation film, Johannes Hartmann approached the producers Tero Kaukomaa and Valentin Greutert, with whom he founded Swissploitation Films in autumn 2019. Mad Heidi is Hartmann's directorial debut as a director of a feature-length fiction film.